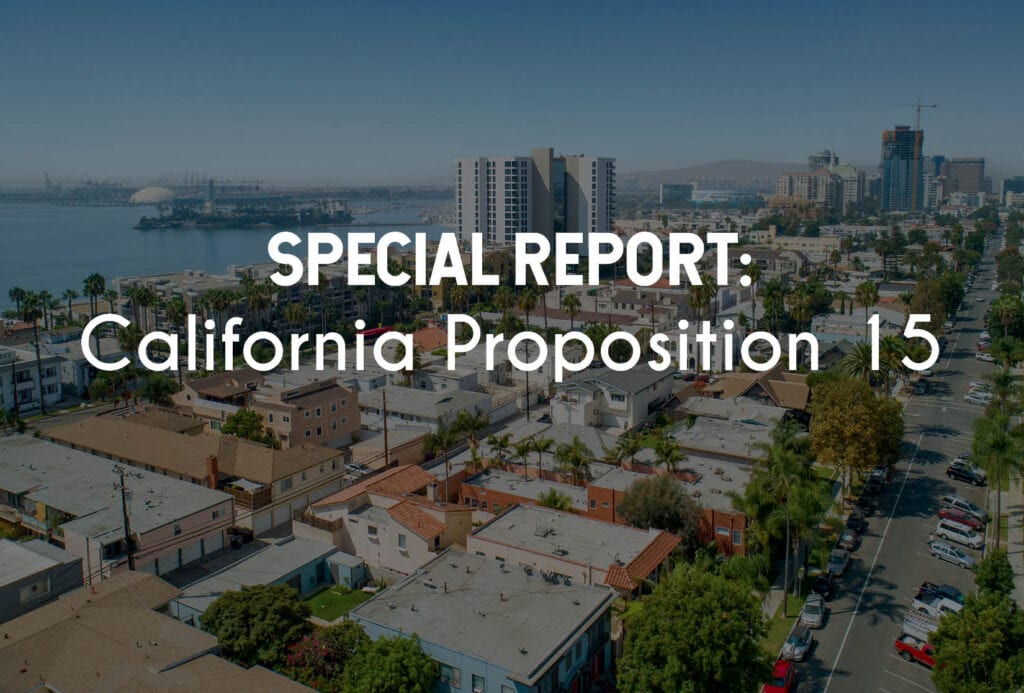 Initiative is the largest proposed tax increase in California history. Proposition 15 would require counties to reassess most commercial properties every three years and be taxed at market value rather than purchase price. Estimates of proceeds from the new tax structure range from $8 billion to more than $12 billion and funds would mostly be distributed to local communities and school districts. In November, voters will decide whether to separate commercial and industrial properties from previous tax protections passed in 1978. Current law limits property tax to 1 percent of assessed value in 1976 and increases can be no greater than 2 percent each year. The largest benefit to property owners is a lack of reassessment until a change in ownership.

Several exemptions are included in the proposal. Residential real estate will not be included in the split roll, including multifamily properties. Prior to the health crisis, most coastal California communities faced a housing shortage and raising taxes on those properties could have been detrimental to lower-tier apartment properties that have been owned for a long period of time. Another element is a $3 million exemption. If each owner has less than $3 million in commercial property in the state, the tax would not apply. Bipartisan support to close the “partner loophole” has existed in California for several years as many assets changed hands in nonarm’s length transactions to avoid revaluation.

Implications for tenants will be significant. Retailers may bear the brunt of the rise in taxes due to the structure of existing leases. Most net leases, which are prevalent in the sector, pass through taxes to lessees. Small and local retailers have already been injured by pandemic-related shutdowns and shouldering a significant rise in taxes will likely force many to shutter. Those tenants in older buildings or low-traffic areas face the greatest risk from pass-through taxes while large chains will weather the increase more easily. Net leases have also been rising in popularity across other sectors in recent years, including industrial and single-tenant office properties. Ultimately, the increase in taxes will trickle down to consumers through higher rents and product costs.

Mixed results for property owners. If the proposition is passed, properties that have been owned for more than 20 years could face double the previous tax obligation. Much higher taxes will need to be factored into new leases. On the other hand, assets that generally offer full-service rents may compete on a more level playing field regardless of purchase date. For decades, multi-tenant office buildings within the same office district could have vastly different tax obligations, making it easier for some operators to compete. The $3 million exception and revaluation of large sectors of commercial real estate may also create more opportunities for investors to move into the market as the impetus for a long-term hold is eroded.

The information contained in this report was obtained from sources deemed to be reliable. Every effort was made to obtain accurate and complete information; however, no representation, warranty or guarantee, express or implied, may be made as to the accuracy or reliability of the information contained herein. This is not intended to be a forecast of future events and this is not a guaranty regarding a future event. This is not intended to provide specific investment advice and should not be considered as investment advice. Source: Marcus & Millichap Research Services