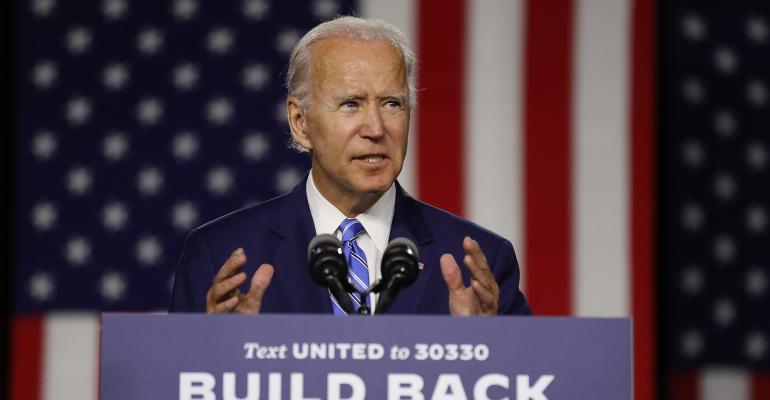 The presumptive Democratic nominee’s plan would cost $775 billion over 10 years.

Joe Biden, the presumptive Democratic candidate for president, today unveiled a 10-year, $775 billion plan to fund universal childcare and in-home elder care that would be paid for by taxing real estate investors. During a live appearance in Delaware this afternoon, Biden said the plan is “about easing the squeeze on working families who are raising their kids and caring for their older loved ones at the same time.” He described the current situation as a “care-giving crisis within an economic crisis within a healthcare crisis.”

The details on the funding mechanism are scarce. The 10-page plan only mentions the tax once, saying it “will be paid for by rolling back unproductive and unequal tax breaks for real estate investors with incomes over $400,000 and taking steps to increase tax compliance for high-income earners.” During his live appearance to discuss the plan, Biden did not offer much detail beyond that statement, touching only on the fact that the proposed improvements to childcare and elder care in the U.S. could be paid for by rolling back some of the “unproductive tax cuts for real estate investors” featured in President Trump’s 2017 JOBS Act.

On Tuessday afternoon, Biden delivered prepared remarks on the plan without expanding any further on the proposed tax changes.

According to a Bloomberg report, “a senior campaign official said a Biden administration would take aim at so-called like-kind exchanges, which allow investors to defer paying taxes on the sale of real estate if the capital gains are reinvested in another property. The official also said they would prevent investors from using real-estate losses to lower their income tax bills.”

The proposal was met with concern by the Real Estate Roundtable, a non-profit public policy organization based in Washington, D.C. that represents the interests of real estate.

“The long-standing like-kind exchange tax law has encouraged investment in affordable housing and other properties, generated state and local tax revenue, and spurred new jobs through labor-intensive property improvements,” says Jeffrey DeBoer, presdent and CEO of the Real Estate Roundtable. “Exchanges reduce the need for outside financing, leading to less leverage and debt on U.S. real estate. As a result, exchanges allow cash-strapped minority, women, and veteran-owned businesses to grow their business by temporarily deferring tax on the reinvested proceeds. Like-kind exchanges are particularly important during economic downturns when access to capital is less certain. In short, like-kind exchanges create a more dynamic real estate marketplace, ensuring properties do not languish, permanently underutilized and under-invested. Congressional review of like-kind exchanges is reasonable and appropriate, and we will support sensible reforms, as the Roundtable has in the past, that preserve and maintain the provision’s broad-based economic benefits.”

In additoin, Randy Blankstein, president of Wilmette, Ill.-based firm The Boulder Group, which specializes in handling transactions of net lease properties, also has concerns about the proposal. “While it may seem to some that limiting or eliminating the 1031 exchange would only affect affluent investors and those directly related to the real estate industry, the reality is quite different,” Blankstein says. “The negative impact of changing  the 1031 rules would be widespread  as a result of the declining property values and reduced transaction activity. Illustrative examples of this include diminished retirement accounts of individuals that are invested in REITs directly or indirectly via index funds or their pension and municipalities losing significant revenue as the property tax base declined and transfer taxes fell.“

Biden’s proposal document is titled “The Biden Plan for Mobilizing American Talent and Heart to Create a 21st Century Caregiving and Education Workforce.” The plan allocates $450 billion over a decade to “give more people the choice to receive care at home or in supportive community situations, or to have that choice for their loved ones.”

It would also help expedite clearing a waiting list for Medicaid home and community services. According to Kaiser Family Foundation data cited in the document, the waiting lists currently have more than 800,000 people and the wait is up to five years in some states. The plan would also fund the hiring of 150,000 community healthcare workers.

The plan would subsidize childcare for families earning up to 1.5 times their state’s median income so they would pay no more than 7 percent of their income towards childcare. The plan would also include credits for businesses to add childcare facilities to their workplaces.

It is the third plank of Biden’s proposed recovery plan. The first two parts included a pathway to reopening schools safely and a roadmap for protecting the coronavirus supply chain.

Casa Andini in Buena Park Sold for Over $7 Million